On the way to EU membership: Ukrainian judges are preparing to apply European Union law 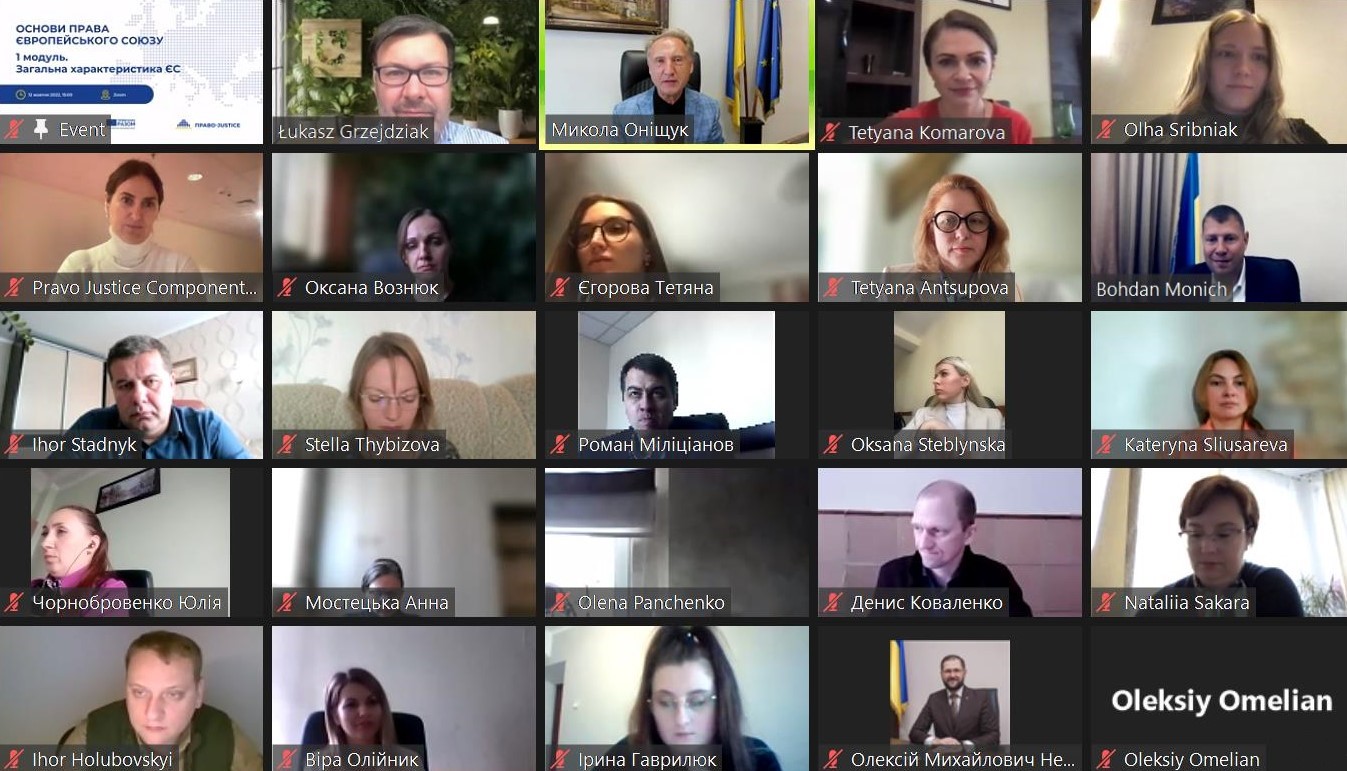 On November 9, the EU Project Pravo-Justice completed the online training course "Fundamentals of the Law of the European Union". The course was held in cooperation with the National School of Judges of Ukraine. The trainees of the course became judges and assistant judges.

During five interactive modules, the trainers of the course, leading national and international experts of the EU Project Pravo-Justice reviewed the institutions, sources and principles of EU law, judicial protection, as well as a number of practical issues important for Ukrainian judges. For example, the trainers talked about the principles of EU competition law and public procurement, the application of EU private law, as well as the issue of the Ukraine-EU Association Agreement as a source of law in Ukraine.

Starting the course, the trainers presented the legal nature and institutions of the European Union, and discussed with the listeners the principle of checks and balances in the EU institutional system.

According to Lukash Grzejdziak, an international expert of the EU Project Pravo-Justice, Ukrainian judges will be able to effectively apply EU law only after forming an understanding of the characteristics of EU law, primary and secondary legislation, and the legislative process.

"It is no less important to understand the practice of the EU Court of Justice and its impact on the interpretation of supranational EU law, the development of the European legal system, and the administration of justice," - emphasized Tetyana Komarova, national expert of the EU Project Pravo-Justice.

The participants had the opportunity to study in detail the Ukraine-EU Association Agreement as a tool leading to the gradual integration of Ukraine into the EU internal market. In particular, the course paid attention to the topics of application of the Agreement by national courts of Ukraine, as well as the practice of interpreting its norms.

Considering the topic of EU competition law, Kseniia Smyrnova, course trainer, national expert of the Project, noted the importance of this topic for the judicial system in the context of European integration processes.

"The Ukrainian judicial system must be prepared to apply the rules of economic competition, understand EU competition law, including primary, secondary, as well as the decision of the Court of Justice. This is extremely important for Ukraine's integration into the EU internal market" - Kseniia Smyrnova stressed.

National expert Tetyana Tsuvina spoke about the peculiarities of the application of EU private law. After all, the Ukrainian judicial system will soon face issues related to the recognition and enforcement of court decisions in cross-border cases.

"Which court to go? What law to apply? How to implement the decision? After acquiring the status of a candidate for accession to the EU, the Ukrainian judiciary must prepare for the practical solution of these and other issues that will arise during the application of European international private law", - emphasized Tetiana Tsuvina.

The key national expert of the component "Judiciary" of the EU Project Pravo-Justice Olha Sribniak thanked the speakers and participants for productive cooperation and fruitful discussions during each module.

"This training course was developed at the request of judges who wanted to strengthen their basic knowledge of EU law and its application. The program and materials will be transferred to the NSJU and will be used by its trainers to educate judges in this direction. At the same time, the EU Project Pravo-Justice will continue to acquaint justice authorities with the EU legal system, including through similar educational events," - said Olha Sribniak.

In total, 31 participants took part in the course, including judges and assistant judges of the Supreme Court and courts of various instances from a number of regions of Ukraine.