Online trials and Alternative Dispute Resolution: What the society will get after the ‘new’ judicial reform? 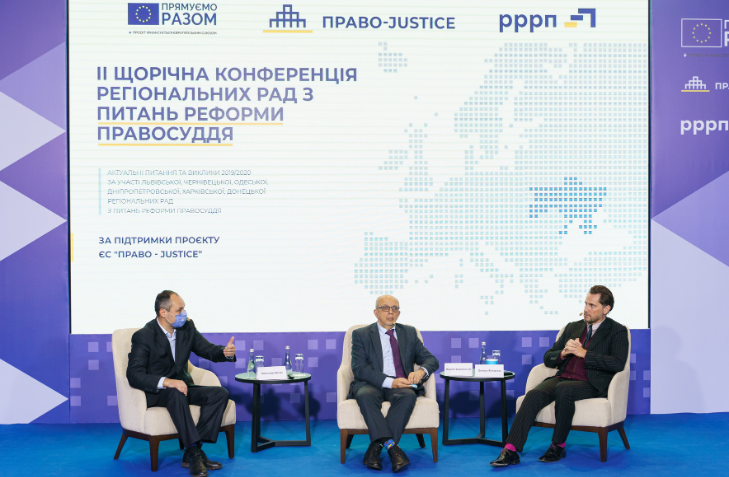 Online participation in court hearings. Implementation of a system similar to ‘Diia’ to obtain legal documents. Effective and efficient execution of judgments. All this will become real after the full-fledge implementation of the judicial reform. And this is exactly what the EU is helping us with.

Most population stand for immediate changes in the judicial system, as do Western partners. Besides, the judicial reform is a prerequisite for obtaining IMF loans. What is needed for effective implementation? And how much time the judicial system will need to change fundamentally?

Consultations on the judicial reform implementation have been held for several years: Western partners share the experience of making similar changes in Lithuania, Poland, and Bulgaria. Currently, a wide range of Ukrainian and international stakeholders have already developed the draft Strategy for Sustainable Development of the Judiciary for 2021-2025.

‘A strategic approach is absolutely necessary in order to see the big picture of measures, which will make the judiciary not only more independent but also accountable’ said Dovydas Vitkauskas, Team Leader of the EU Project Pravo-Justice.

The draft Strategy covers the necessary transformations: from the address of staffing issues up to the introduction of new tools for Ukrainian society, such as mediation and alternative dispute resolution. Representatives of the Interregional Working Group of the Regional Justice Reform Councils (RJRCs) also came up with the proposals in the implementation of the strategy under the existing circumstances.

Today, the implementation of the judicial reform is more timely than ever: after all, the society has a huge demand for changes in the judicial system, says Andrii Ryshchenko, judge of the Regional District Court of Dnipropetrovsk oblast and coordinator of the Dnipro RJRC.

‘For years, politicians at various levels have kept saying that the previous reform was wrong, and the courts are not working properly,’ said Andrii Ryshchenko. ‘Constant information attacks on courts and judges got drilled into people’s minds; so that once a taxi driver complained to me that the courts are to blame for another rise of the dollar exchange rate.’

However, the judge notes, people need consistency. While in Ukraine, not a single judicial reform has been completed. And so far the government has not defined yet the criteria for the success of the transformations.

Moreover, according to the experts, because of ‘the reforms for the sake of reforms’, the judicial system has ended up in a very complicated situation, as there is simply no one to work in the courts. As a result of the introduction of qualification evaluatin, more than a quarter of judicial positions are vacant, and this number will be growing.

‘The issue of staffing is the most painful one and needs urgent action,’ says Anna Pavlevska, chief of staff of the South-Western Commercial Court of Appeal, member of Odesa RJRC. – ‘We started talking about the insufficient number of judges back in 2018-2019, when many judges resigned'.

At the end of 2019, the High Qualification Commission of Judges ceased its activities, which led to the suspension of any new competitions and selections of judges, the qualification evaluation of judges not being completed. As a result, more than 1900 judicial positions – over 25% - are vacant today. Besides, some 1600 judges have the right to resign in 2021’.

The lack of the court apparatus staff is another major issue. Low salaries are the reason here.

‘It is all about the underfunding of local and appellate courts: last year they received only half of the assigned budget funds,’ says Anna Pavlevska. ‘And in 2021 the situation has become even worse.’

The digitalization of court proceedings is of particular importance for the people, the judges say.

‘Many people living in this country, because of the lack of proper infrastructure, good roads, and convenient transportation means, are fully deprived of the opportunity to go before court,’ said Andrii Ryshchenko, judge of the District Court of Dnipropetrovsk oblast. ‘For instance, people with disabilities and elderly people. Another category includes young people who do not want to visit government agencies at all because of the need to line up and spend time to get there. It is easier for young people to go for digital services whose delivery may be ensured via ‘Electronic Court’.

Such a system already exists and has developed over 2020. During the lockdawn, trials were mostly held on digital platforms, and in some courts – for example, in Lviv District Administrative Court – all case materials are digitized, and each party has the possibility to access them without leaving home or office, as well as submit their documents, and if registered, directly participate in the dispute resolution, says Oleksandr Sasevych, judge of Lviv District Administrative Court, member of Lviv RJRC.

The judges suggest to the future focus be on the accessibility of the ‘E-Court’ for users. The system’s refinement requires additional funding.

According to the lawyers, proper enforcement of court decisions is the next mandatory step to make. The enforcement rate is extremely low in Ukraine. The vast majority of rulings are not enforced, and well-known officials openly declare the non-compliance with court decisions. The experts believe that, under such circumstances, the mere existence of the rule of law in Ukraine is under threat. Judge of Lviv District Administrative Court Oleksandr Sasevych is in favor of the introduction of the judicial control mechanism.

‘I am convinced that the court should not become passive after having rendered a decision – it should facilitate its execution, says Oleksandr Sasevych. ‘Therefore I see the need for widespread use of judicial control over the execution of court decisions, which primarily requires the initiative from the judiciary'.

Judicial reform will also take into account the changes that have already happened in the country. For example, local courts need to be reorganized according to the new administrative organization.

After the reform, some small cases will be heard within local communities before being referred to court review. To do this, the institute of peace justices will be introduced. Other dispute resolution tools, including mediation, will also become available. Experts believe such steps serve the interests of both judges and participants to a dispute, says Oleksandr Sasevych.

'Reconciliation or dispute resolution through mediation is very effective, as it irons out the dispute and offers the parties an opportunity to agree on the option which is acceptable for everyone,’ said Oleksandr Sasevych. – ‘In my job, I always try to go down to the core of the problem and find a possibility for reconciliation, to give the parties a view of their problem from another perspective, in order to solve it peacefully. If this method is finally enshrined in law, it will significantly relieve the courts and provide the society with new effective ways to resolve disputes.'

Improving the integrity of judges and the proper organization of the administration of the judiciary are also important. These goals can be achieved if the High Qualifications Commission of Judges is transparently restored and the control over the integrity of judges by the High Council of Justice is strengthened, the judges believe. By the way, two draft laws related to these reforms are already being considered in parliament.

What is the most important, as emphasized by judges and international experts, is to be consistent in implementing reforms. It is necessary to come up with a clearer wording of the Strategy provisions and the criteria of changes implementation. In the meantime, the strategic approach should not be abandoned.