How will the law on transitional justice solve the problems of residents of the occupied territories? 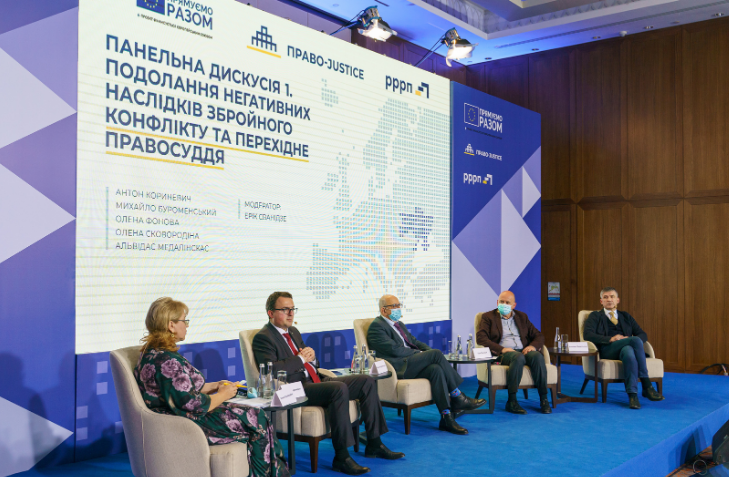 Non-recognition of "documents" issued at the place of residence. Invalid transactions for the sale of property and even impossibility to legally inherit. The difficulty of administering justice. This is by no means a complete list of the difficulties currently faced by residents of the uncontrolled part of Donbas and occupied Crimea.

In addition, the future still remains unclear for people beyond the demarcation line: who is amnestied and who can be punished after deoccupation? Who will compensate for the damage caused by the conflict? All this should be resolved by the law on transitional justice. Currently, a targeted draft law developed by the Ministry of Reintegration is being discussed by Donbas legal community, namely Donbas Regional Justice Reform Council.

At the same time, on March 11 2021, the President of Ukraine signed a decree implementing the decision of the National Security and Defense Council "On the Strategy of Deoccupation and Reintegration of the Temporarily Occupied Territory of the Autonomous Republic of Crimea and the City of Sevastopol". Experts from EU Project Pravo-Justice are also helping to apply foreign experience. How unique is the situation in Ukraine and what should be taken into account before adopting the document?

One of the key problems faced by residents of uncontrolled territories is registration of documents on birth and death, marriage and divorce in the territories controlled by Ukraine. Currently, all this is done only through recourse to the courts. And although the institutions do their best to help people, speeding up the consideration of such cases, the procedure still remains difficult, says Judge-Speaker of the Commercial Court of Luhansk region, coordinator of the Donbas Regional Justice Reform Council Olena Fonova.

"People need to come, and more than once, to a settlement where the institution dealing with it is placed, spend at least a day on it, find a place to spend the night if one did not manage to do it all in one day and got stuck in one of the queues at checkpoints and roadblocks in ORDLO," – says Olena Fonova. “It all takes time and money. If one goes to court to establish the fact of birth or death so that the registry office issues the appropriate certificate, they have another institution on the list of places to visit."

Residents of Donetsk and Luhansk find the administration of justice in the controlled territory difficult, says Olena Fonova. This is especially important, in particular, for registration or renewal of pensions. One can file a lawsuit in two ways: by mail and electronically. However, elderly people often do not have the Internet or do not know how to use it and post offices are located only in controlled settlements.

"It's not easy from here on, either," the judge-speaker comments. "To file a lawsuit, it must be drafted. It is very difficult for a person without legal education. In addition, someone must also come to court and represent the interests of the plaintiff, for example. It is impossible to find a lawyer without visiting our territory, as a notarized power of attorney is required to represent a citizen, which is also certified in the controlled territory. All these difficulties are a significant obstacle to access of a person living in the temporarily occupied territory to the Ukrainian court," says Olena Fonova.

The law on transitional justice currently being discussed by the legal community, and in particular the Donbas Regional Council for Justice Reform, is designed to solve urgent problems with the papers of Ukrainian citizens and clarify the general vision of the future of the uncontrolled territories. The bill was drafted by the Ministry of Reintegration of the Temporarily Occupied Territories of Ukraine (Ministry of Reintegration).

"The draft law deserves attention because finally, after 7 years, the state managed to make an attempt to legislate many painful issues for people in the temporarily occupied territories (TOT)", – says Olena Fonova.

The new draft law provides for the solution of problems with documents: in particular, after its adoption, the residents of uncontrolled territories will no longer have to go to court for recognition of birth or death, marriage or divorce. Instead, everything will be decided in the registry offices. The issue of recognition of certain transactions will also be governed.

"Finally, at least people will not need to register a will or gift both in LPR and in the territory controlled by Ukraine," says Olena Fonova, "the law also governs many issues of the post-occupation period that will arise when the occupation is over. This is very important in order to restore the leadership and management of settlements and ensure the rights of citizens in these areas."

The draft law should become a document that will help increase the confidence of residents of uncontrolled territories, says secretary of the working group on reintegration of the temporarily occupied territories of the Commission for Legal Reform under the President of Ukraine, national expert of the EU Project Pravo-Justice Alona Lunova.

"Transitional justice is centred around the victim, that is, around the person who suffered from the conflict," commented Alona Lunova. "It is in this concept that the interests of the individual must be protected. And even responsibility is more about what the victims of the conflict should feel - the evil that caused the armed conflict should not get off scot-free. This is the main value vector. Secondly, the main tasks of the state and its leadership should be set out here."

Transitional justice has four main components: the investigation of criminal offenses committed during the conflict, compensation for victims, the right to the truth about the armed conflict and its participants, and institutional reforms preventing new conflicts.

Crime investigations require documentation of violations of international humanitarian law. In addition to domestic law enforcement agencies, international missions are also involved in this. Registers of destroyed property and legal compensation mechanisms are required to pay reparations. Perfect mechanisms of amnesty and lustration, restoration of public administration in the occupied territories will help to avoid social tension. The state has to ensure the existence of these components, lawyers say.

"Central and binding in the concept of the law would be a state declaration that people living in uncontrolled territories have not committed crimes and should not be held responsible for living in occupation," insists Alona Lunova. "And it is about such initiatives that people should hear first."

74% of Ukrainians are in favour of restoring ties with uncontrolled territories. And they are for the state to take the initiative in this matter. This is evidenced by sociological survey "Thoughts and views of Ukrainians as to the armed conflict in Ukraine" by the School for Policy Analysis of the Kyiv-Mohyla Academy. In these circumstances, the draft law on transitional justice will be both a response to public demand and a key document facilitating reintegration of the temporarily occupied territories.

The decree on the implementation of the decision was signed by the President of Ukraine Volodymyr Zelensky on March 11, 2021. The strategy, in particular, provides for compensation to victims, prosecution of perpetrators, recognition of the right to truth about the conflict and prevent conflicts again. In these circumstances, the draft law on transitional justice will be both a response to public demand and a key document that will facilitate the reintegration of the temporarily occupied territories.