On October 29, Kharkiv hosted the East Ukrainian Forum dedicated to the bankruptcy-related issues arising in Ukraine. The event was attended by the experts of the EU Project Pravo-Justice and the representatives of the Regional Justice Reform Councils (RJRCs).

Dovydas Vitkauskas, Team Leader of the EU Project Pravo-Justice, delivered a speech where he spelled out the existing legal restrictions on the bankruptcy of state-owned enterprises, the moratoria on bankruptcy proceedings, the impact on the stability of market relations, and the prospects for legislative changes.

“We see positive dynamics in the development of bankruptcy in Ukraine. However, there is still much to be done to achieve better results, especially with regard to state-owned enterprises and moratoria. All enterprises, regardless of ownership, should fall under the same bankruptcy rules. The state should apply moratoria as an exceptional tool for a short period of time,” Dovydas Vitkauskas said. 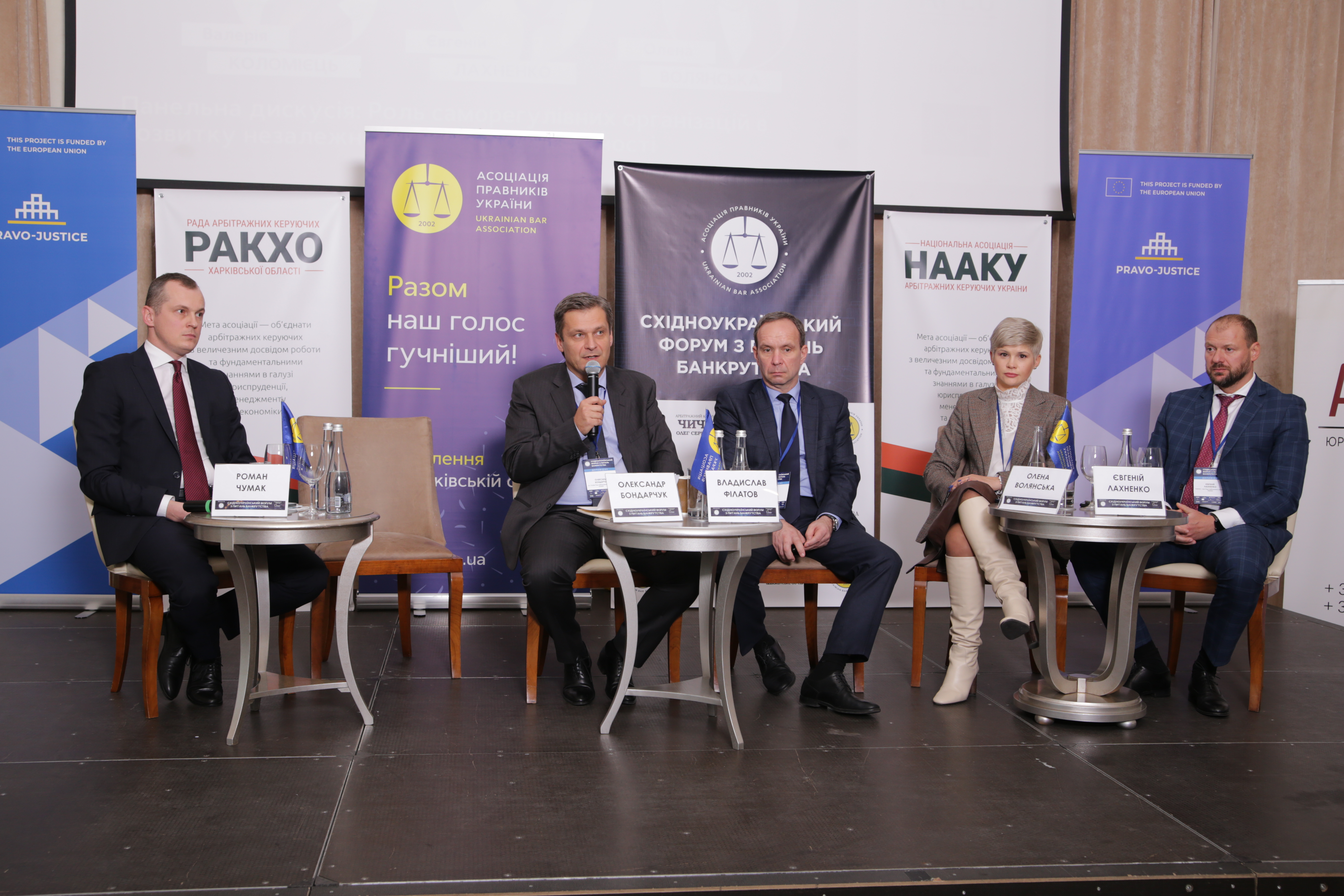 Roman Chumak, coordinator of Kharkiv RJRC, moderated the session on the role of self-regulatory organizations in the development of independent professional activity.

“The EU Project Pravo-Justice has supported the creation of Regional Justice Reform Councils so that the regions could influence the policies of the central government. For instance, the RJRCs members have developed amendments to the Code of Bankruptcy Procedures. The EU Project has also been promoting the development of self-regulation in Ukraine by supporting private enforcement officers, notaries, and bankruptcy trustees,” said Roman Chumak, lawyer, BT, Managing Partner of ARES Law Firm.

Olena Fonova, coordinator of the Donbas RJRC, judge of Commercial Court of Luhansk region, presented the proposals aimed at the improvement of the bankruptcy procedure for foreign currency borrowers.

“The latest preferential bankruptcy procedure is much more interesting for foreign currency borrowers. It is free of charge, fast, provides bonuses for owners of “social residential property”, and other benefits. At the same time, a number of procedural shortcomings make it virtually unfeasible. The RJRCs members and the Project Experts, while being part of the Working Group on Improving Bankruptcy Legislation, have developed proposals to improve this procedure, which have been included in the draft law No. 5739,” Olena Fonova said. 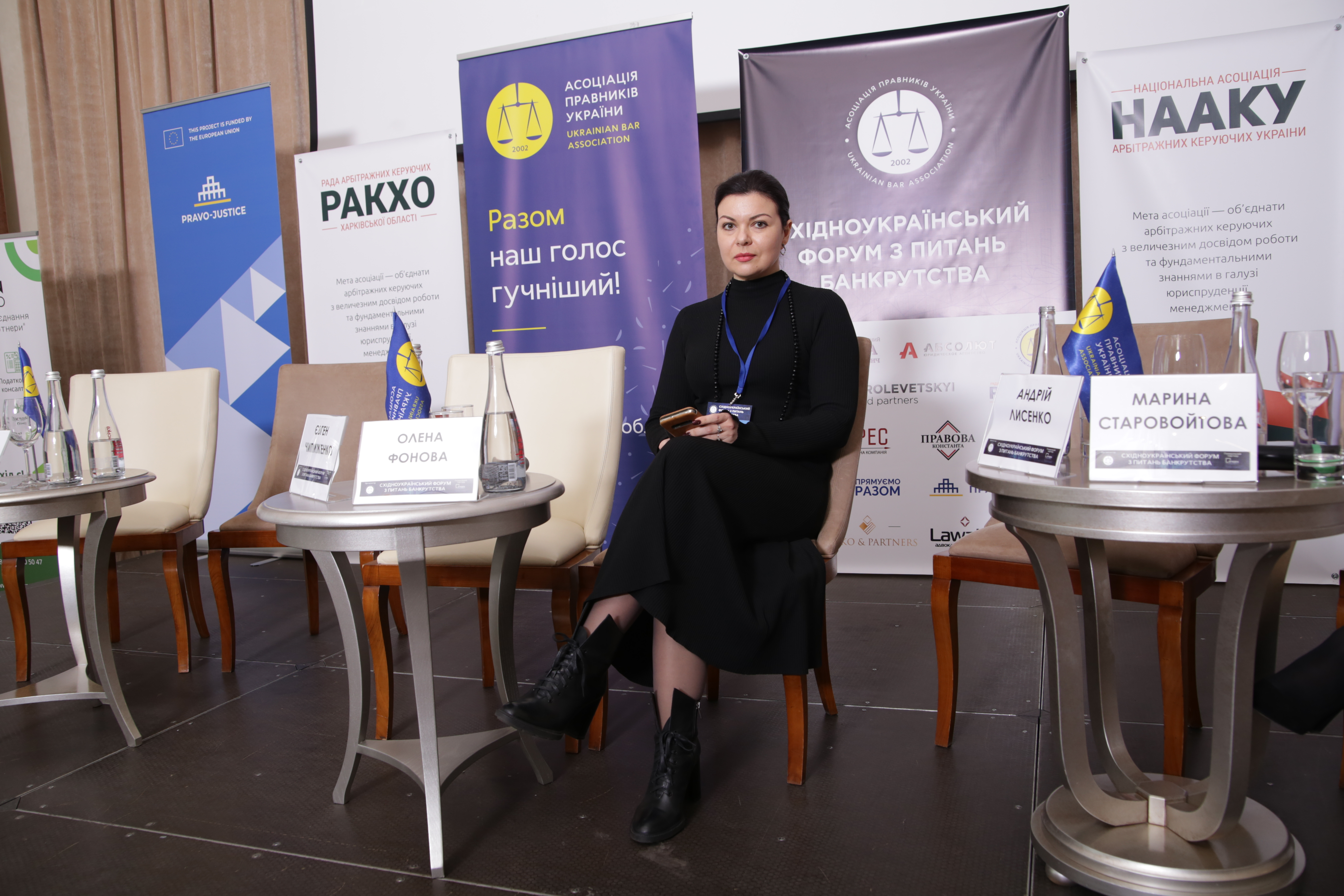 Following the discussion, the participants agreed that there were many factors that hindered the development of bankruptcy in Ukraine. First and foremost, these are numerous statutory moratoria, which create obstacles to the initiation of bankruptcy proceedings in respect of enterprises of entire sectors of the economy: energy, coal, etc.

Moratoria may be imposed by the state only as a temporary measure, but in Ukraine such moratoria have been in force for years. It is very important for the economy to remove “bad assets” from the market in time, rather than “protect” them from creditors through moratoria.

Further work on improving bankruptcy legislation is of great importance. The draft laws developed by the Working Group at the Ministry of Justice are pending before the Verkhovna Rada. The RJRCs members contributed to the development of legislative amendments during the strategic session.

The participants also discussed the development of the self-regulatory organization (SRO) of bankruptcy trustees. Having got through the establishment stage, the community now faces new challenges. Thanks to the close cooperation between the Ukrainian National Insolvency Trustees Association and the Ministry of Justice, the SRO will soon be authorized to conduct internships and advanced training for BTs.

The development of the BTs community depends much on the work of the Disciplinary Commission of BTs. Proposals for reforming the system of disciplinary proceedings in respect of bankruptcy trustees were presented at the event. The relevant report will be presented with time by the experts of the EU Project Pravo-Justice.

The issues of joint and subsidiary liability of the manager of a bankrupt enterprise were not left out. The case law testifies to the development of these types of liability.

Regional Justice Reform Councils (RJRCs) have been established with support of the EU Project Pravo-Justice and function in Chernivtsi, Dnipro, Kharkiv, Lviv, Odesa regions and Donbas. To date, Councils members have been actively participating in drafting a bill on mediation, amendments to the Bankruptcy Code, proposals to improve legislation on enforcement proceedings, introducing e-court and discussing the concept of transitional justice.