Dovydas Vitkauskas: Congress of bankruptcy trustess was an example of effective democracy and respect to each other 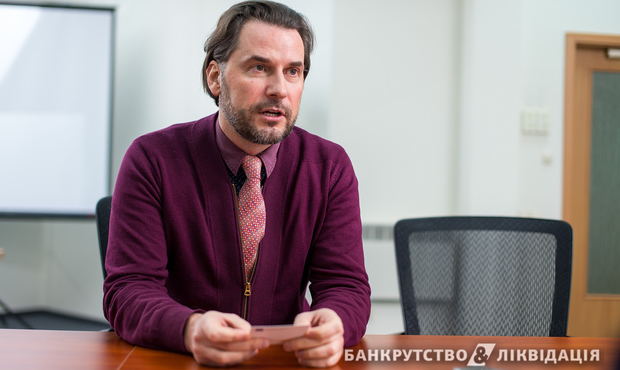 In an exclusive interview with the Bankruptcy & Liquidation portal, Dovydas Vitkauskas, EU Project Pravo-Justice Team Leader spoke about his impressions of bankruptcy trustees' congress and expectations as to bankruptcy reforms.

How important is bankruptcy reform for Ukraine to show development and promote positive image?

People may not always perceive word "bankruptcy" in the right way. But bankruptcy is important not only for the legal system but also for society as a whole because when we talk about bankruptcy, we talk about balance: on the one hand, it is the interests of free business and free economic activity, on the other - responsible economic activity, which is primarily responsible to creditors. When loans are taken and non-repayable debts are created, when creditors are "on the ice", when debt is disposed of by using unfair and sometimes criminal methods, it does not create favorable conditions for social and economic development of society.

Therefore, the balance between free business and responsible behavior is very important and the bankruptcy system is a key factor in regulating this balance.

How much are investors scared when they hear a statement by of one oligarch that "only cowards pay debts back"?

Nobody likes to pay off debts, it's human nature. But reasonable legal systems create conditions under which the debtor will not be "carried away", he constantly feels that if he cannot repay the debt, then he will no longer be given money and he will no longer have a good reputation. Therefore, in reasonable legal systems, when a person receives a loan, they do everything to pay it back. And if the borrower has problems (and in any business, there may be strategic mistakes), then it is necessary to create conditions for such a debtor to make the burden of debt repayment easier. Small, medium and large companies have a plan for how to pay off debt. But such making things easier for the debtor should not be such that lenders or business partners are left "on the ice".

There is still a lot to be done to prevent dishonest debtors from "being carried away" in Ukraine, and we hope that the reform of the bankruptcy system will make significant steps towards improving the situation.

To what extent is bankruptcy reform necessary? Some market players have argued that it was made a mountain out of a molehill…

Looking at the key parameters of responsible economic activity, one of the indicators of its success is how much money lenders receive back from companies in bankruptcy stage on average. In some European countries, this figure reaches 90 cents per 1 euro. This means that the debtors are paying their creditors almost completely.

In Ukraine, this figure is 9 cents per dollar. This means that lenders do not get back almost anything. However, when people are outraged by high interest rates on loans, they need to understand that interest rates are like that precisely because when a lender provides finance to any business, he or she is at high risk that if a borrower faces difficulties, the lender will only get 9 cents per dollar back.

Therefore, it is necessary to create conditions for Ukraine to advance to at least 50 cents per dollar. And it is necessary for Ukraine to have a comprehensive financial system. Today, by and large, it does not exist exactly because of the risks associated with dishonest debtors and a non-transparent bankruptcy procedure. Speaking about another parameter - political, why reform was needed, it is an excessive role of the state in the economy. In Ukraine, the state does business where it should not do so. The role of the state is to regulate and create conditions for business, not to replace it where private business will do everything faster, more efficiently and at less cost.

Therefore, bankruptcy reform will give impetus to the fact that, in the last 30 years of Ukraine's existence, a full-fledged privatization debate will begin in Ukraine. State-owned companies are inefficient here, they do not pay their partners, creditors and even employees. I am saying this on the basis of the data we see in the decisions of Strasbourg Court, in which Ukraine is mostly "beaten" for this very reason - because the state, state institutions and state-owned enterprises do not pay. They do not pay even when they lose the court proceedings. Therefore, bankruptcy reform is another reason to talk about privatization, what the state's role in the country's economic system should be.

It should be limited to those sectors and areas that are vital to all. For example, on national security issues. That is, the state should not produce bread and vodka (laughs). And in Ukraine, the state is still doing it.

The Code has long been drafted, long adopted, and there were doubts that it will come into force on time. In your opinion, how much is it "alive" and correct, and was it necessary to delay its entry into force?

No laws are perfect. But enforcement practice can be predictable, it can create clear conditions for all market participants to behave in a more predictable, fair and accountable way. Our job was to make an effort and prepare a draft law that would reduce the risk of inconsistencies, inefficiencies and other undesired results. Our task was to make it come into force as soon as possible. And we are very pleased that this has happened on October 21st.

On the other hand, as experts, we understand that there will be inconsistencies. For example, case law shows that the new provisions of the Code are incompatible with other laws. This is normal. It may seem that the result prescribed by law has not been fully achieved or not achieved at all. This is also normal. We call this process monitoring: what effect the law has and how it is enforced, how much enforcement is predictable, how much the courts understand the intentions that the lawmakers laid down in the law. We are monitoring this and are discussing with our colleagues not to change the law at once, but to at least have a more complete picture. After the monitoring, we will come up with new proposals, but it will depend not only on us as experts but also on our Ukrainian partners. Here we work closely with both the Ministry of Justice, the Parliament, and the newly-formed Association of Bankruptcy Trustees. The views of lawyers and the judiciary are also very important. And when there we have a complete picture (what works and what doesn't), only then will we propose some changes.

When will first results of this monitoring be announced?

We see some results now. We set up six councils of justice reform in the largest cities of Ukraine and Chernivtsi. Through these regional councils, we seek to discuss and predict the effect of new laws. The legislator's system and intention were clearly to increase transparency, accessibility of bankruptcy procedures, and their speed. Speed is key to business because time is money. I think we will have a more comprehensive picture by the middle of next year.

What is your assessment of the extent to which the bankruptcy courts are prepared to conduct cases under the new Code? Will judges have enough education and knowledge?

Unlike other draft laws, especially in the area of justice, which are created and adopted at a stratospheric speed, there was enough time to prepare for work under the Bankruptcy Code. All legislative efforts were made clear a year ago. We have not wasted time, we have been discussing with the judiciary since early spring this year where there may be inconsistencies and problems in terms of effective enforcement of the law. We had time to prepare. And I think that the judiciary is readier to enforce bankruptcy laws than many other laws drafted to reform justice.

How much is the Ministry of Justice's role in bankruptcy reform transparent and correct?

Institutional structures are created to strike a balance between free and responsible business. In most European countries, and Ukraine adheres to this example, private legal profession of bankruptcy trustee is the key lever through which this balance is achieved. It is a very responsible and delicate work, many different interests intersect here - debtors, creditors, closed beneficial owners. There are many corruption risks here, so bankruptcy trustee must be independent on the one hand and accountable on the other.

Here, too, the Ministry of Justice played a very positive role, because it not only allowed but also encouraged the establishment of association of bankruptcy trustees. We were fortunate to be involved in this process as a key donor and have assisted, starting with strategic issues - what the role and purpose of the association should have, and ending with technical issues.

We, along with the Ministry of Justice, have made it clear to bankruptcy trustees that they must be the point that will regulate and strike a balance in the interests of free and responsible business, helping businesses to restructure and assisting with bankruptcy.

On the other hand, bankruptcy trustee is a private legal profession and it is regulated, the Ministry of Justice remains its regulator.

Today, the Ministry of Justice has many excessive roles, but they are related to the historical experience of Ukraine. Private legal professions are not trusted in Ukraine, and the process of building trust is very slow. And what private professions do more and more effectively in Europe is often done by the state in Ukraine. This applies to bankruptcy and supervision processes, both to the notary and to the enforcement process. Therefore, our task is to increase the role of the private legal profession so that they are more independent, provide a better service and, on the other hand, are accountable. Therefore, I think that the watershed between the roles of private law associations (including bankruptcy trustees) and the Ministry of Justice is still to be determined. But we are on the right path and we get a specific message from the Ministry that it is ready to allow both bankruptcy trustees and other legal professions to emancipate themselves, to grow out of their "infant" state, when they want to get everything but take no responsibility, and indeed give them authority in a gradual way, including the powers of disciplinary responsibility.