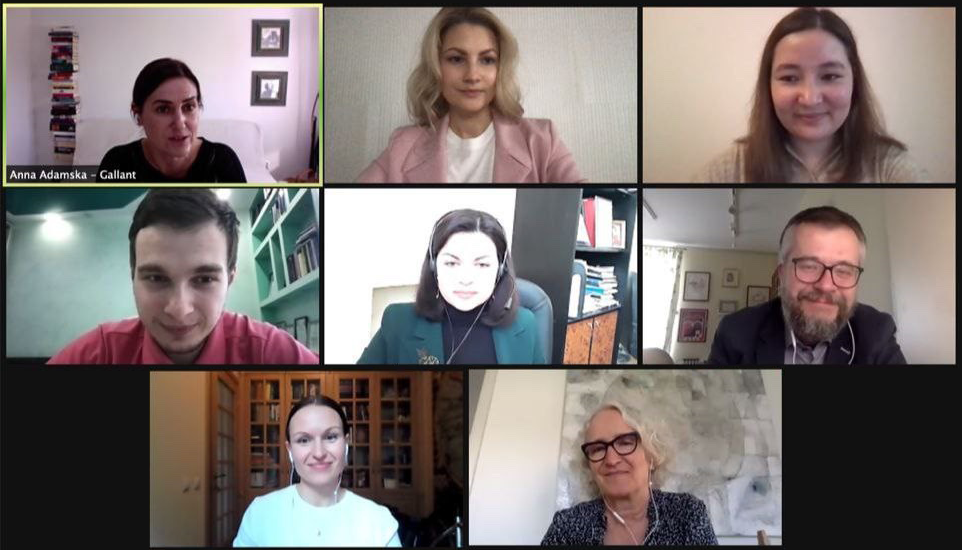 On April 19, the EU Pravo-Justice Project held an online meeting within the framework of the Rule of Law Talks ‘Judge’s Right to Freedom of Expression – Is There a Limit?’ It has been aimed at the discussion of issues relating to judges’ freedom of expression and the definition of its limits.

The exercise of the right to freedom of thought and expression alongside the free expression of views by a judge is a necessary pre-requisite for the development of a democratic state in which the judiciary communicates with society. However, when expressing their opinion during the administration of justice and out of court, a judge must adhere to the Code of Judicial Ethics. In particular, a judge may not comment on court cases in the media or criticize court decisions that have entered into force, or the conduct of their colleagues, if such a comment is detrimental to the authority of the judiciary.

In EU countries, it is common practice for judges to comment on and explain the reasons for their decisions. Applying such a procedure in Ukraine would help citizens to better understand the specifics of the work of judges and their decisions, which due to ignorance, often resonate in society.

Jaroslaw Gwizdak noted that judges will always be under critics, but its intensity can be reduced through communication with society. ‘One should get used to criticism. However, to make it less internse, the judiciary needs to clarify on the most high-profile cases. After all, the clarification of court cases will promote the development of critical thinking of individuals and, accordingly, reduce the level of criticism and its impact on the judiciary,’ Jaroslaw Gwizdak said.

‘The activities of courts, including procedural actions, must be clear. A judgment is usually drafted using complicated legal language, which is not clear to the average citizen. It is from there that arises the possibility of manipulating public opinion and appealing to emotions rather than facts. Therefore, in my opinion, the court should explain its decisions, especially in high-profile cases, so that the public understands that this is what the law says, and the court cannot but apply it. This is especially true of certain procedural actions to be taken by the court, where a judge has no alternative. For example, when deciding on the application of pre-trial custody as a restrictive measure, where the law provides for a respective person the right to bail out,’ said Olena Fonova, judge-speaker of the Economic Court of Luhansk region, coordinator of Donbas RJRC.

Zivile Navickaite-Babkin has also stressed the importance of judges’ communication with the media: ‘The judiciary should talk to journalists not only when there is a high-profile case, but also communicate proactively: regularly explain certain features of the law, organize informal meetings. Because when judges explain certain legislative changes, they set up a certain connection with journalists. The most important thing in the communication of judges with the media is to show readiness to cooperate with journalists.’

Mario Naapi pointed out: ‘We need to spread the idea among both citizens and judges that judges should be seen as providers of judicial services. And those who provide services cannot hide, they must be in sight and must communicate.’

While emphasizing the already significant changes in the courts of Ukraine, Anna Adamska-Gallant said: ‘It is important to inform the public about the existing positive aspects of Ukrainian courts, but it takes time for the society to change its opinion about the judiciary and increase trust.’

All experts agreed that it is important to continue building effective and proactive communication with media. Strategic communications will help increase public confidence in the court.