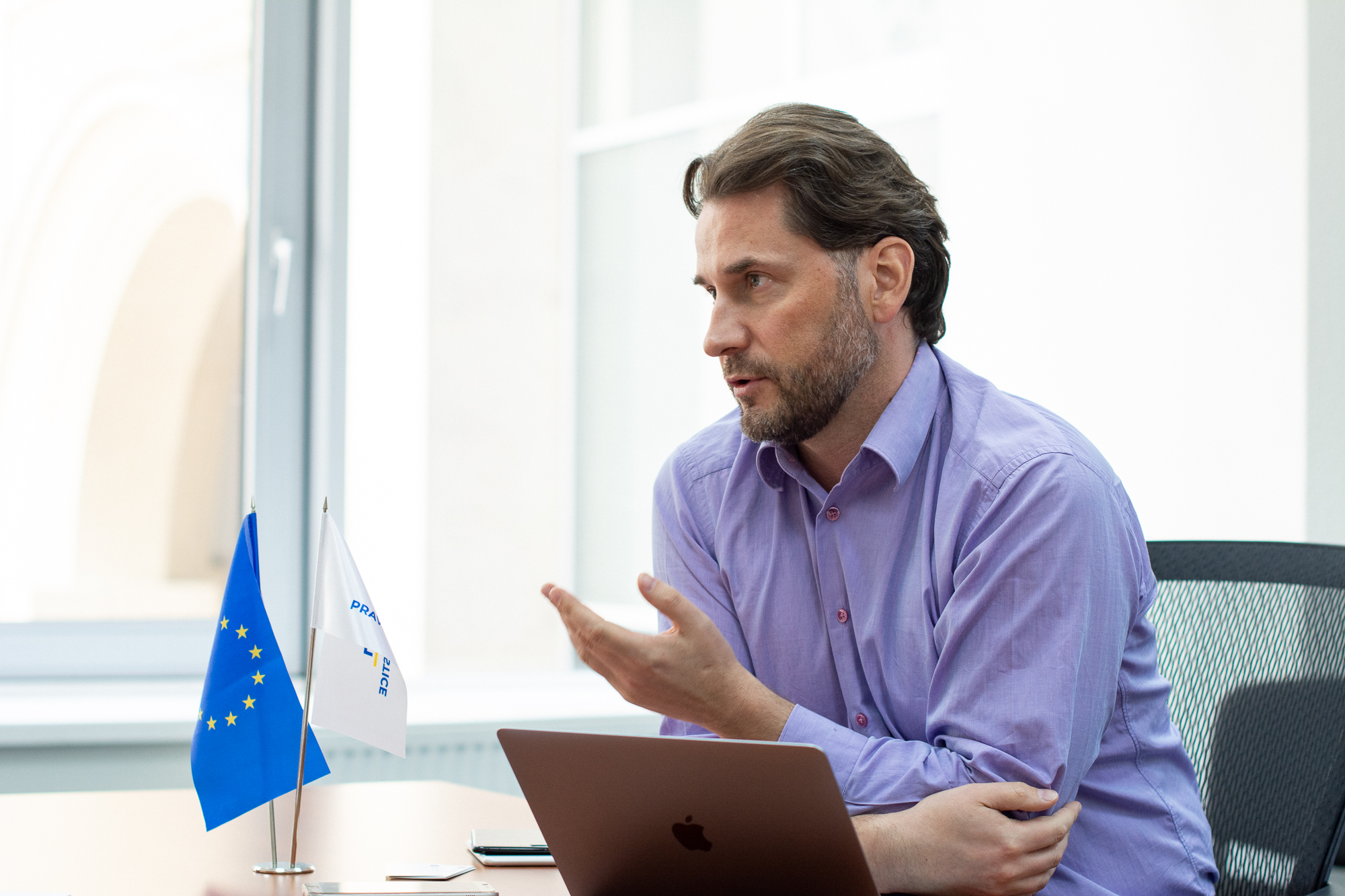 Let’s start with numbers, on the basis of officially available statistics: almost UAH 900 billion, or roughly some EUR 30 billion, are locked in the form of unenforced court-ordered debt in Ukraine.

This is more than one-fourth of Ukrainian annual GDP. It is unacceptable debt, where the defaulted debtor has failed to deliver on his court-ordered obligations. And yet this EUR 30 billion do not include other losses related to the non-performance of justice: namely non-enforcement of non-monetary claims, lack of action by administrative authorities, absence of the ability to claim interest, and the loss of employment or business opportunity. The justice system of Ukraine must understand that it is responsible for this locked EUR 30 billion in particular, and a lack of decency in private and public relationships in general. Add to this that Ukraine is an unparalleled “champion” among the 47 Council of Europe states in being found in violation of the right to a fair trial and property rights by ECHR by reason of the non-enforcement of court judgments.

There are various reasons for this unacceptable situation, including the moratoria by Parliament to protect some privileged (State) debtors, lack of transparent and effective bankruptcy process, insufficiently independent and improperly incentivised enforcement system. Now let’s focus on one main reason only - the role of courts in general, and the issue of blocking debtor bank accounts in particular.

First of all, all court judgments must be enforced. Without enforcement, there is no purpose in the existence of courts. The Ukrainian courts need to understand that they are called upon to help, and not prevent, enforcement, discontinuing any discrimination among the debtors and creditors - especially, discrimination in favour of State entities – and disabling the dishonest debtor from the ability to play the system. One of the proven technological ways to do that is through automated bank account blocking and write off solution (ABABS), which already exists in a number of advanced European jurisdictions. One push of a button - and all bank accounts of the debtor are blocked, and moreover the moneys due as ordered by court are written off instantly. So is Ukraine ready for making its courts a real and inevitable power?

“Not so fast”, the Ukrainian law and practice says. First of all, according to many in the legal community, the Ukrainian policy making culture requires each and every detail to be written in the legislation. Such an approach neglects the importance of allowing technological innovation to dictate the content of the domestic law, rather than refer to statutory obstacles or legal tradition to prevent innovation.

The advanced jurisdictions in EU are trying to focus on new electronic solutions as a way to improve justice. PLAIS, the Lithuanian version of ABABS, is now considered as one of the best practices in the World, cementing Lithuania’s standing as no.1 among EU countries in enforcing contracts, and no. 3 overall among EU states (only behind Denmark and Sweden) in the World Bank Doing Business Ranking 2020. Merely 118 Lithuanian PEOs collect more than EUR 200 million annually in monetary debt, which can be compared with about EUR 600 million collected by more than 5,000 enforcement officers in Ukraine (including the State Enforcement Service, DVS, and private enforcement officers, PEOs). Neither the banks and the Central Bank - nor most importantly, major political and business players - can manipulate this process. This practice shows that, without bank account blocking, there can be no proper enforcement. And without automation, there is no effective and efficient enforcement.

Some automation in blocking bank accounts of physical person debtors is already possible in alimony cases in Ukraine. This innovation reduced delays from the formal decision to freeze to the moment of the actual blocking of the debtor bank account from 1 month to 1-2 days. However, this scheme merely gives the ability for enforcement officers to communicate with the banks by email - this not full automation, which can reduce delays to a matter of minutes, as in the case of Lithuania. Ukraine needs to expand the regulatory possibilities for enforcement officers beyond the alimony debt, and implement the simple software solutions for full automation.

As far as the Ukrainian business bank accounts go, the regulatory situation is murky, as the issue is still pending before the Supreme Court. There is an argument, upheld by some Ukrainian judges, that the debtor company will be unable to pay employee salaries if the company bank account is blocked. This theory disallows any blocking of corporate bank accounts, not to mention automation of that blocking. But shouldn’t enforcement be unconditional? Moreover, if private debtor bank accounts in Ukraine can already be blocked by using electronic means , so why discriminate them vis a vis corporate debtors? Likewise, under EU best practices, “external” obligations of a company are considered as "priority debts" with regard to its “internal” obligations (salaries, dividends etc.), as long as the company is not in bankruptcy process, where some prioritisation of creditors might be warranted. Yet even in bankruptcy, the EU countries (Germany, some other Northern countries) that create no distinction or “lines” between different creditors score higher in the World Bank Doing Business, GDP per capita and growth rates. If a company cannot pay its suppliers and creditors, how can the company continue to do business by pretending to be able to pay its employees - what is a theoretical or practical value in protecting that illusion in a proper market economy? What moral value has an argument that one should protect the debtor company employees, at the expense of the employees of the creditor company? And why are really the Ukrainian courts appear as looking for obstacles to implement a decision that their colleagues just delivered - isn’t it like shooting yourself in the foot? In short, an attempt to protect corporate debtor bank accounts does not stand any reasonable legal, moral, social or economic test.

Currently, the delays in reaching bank accounts of a corporate debtor in Ukraine amount to 1 month or more. These delays are absolutely unacceptable in a modern society, which works on the principle of "time = money". Moreover, while an enforcement officer is writing paper letters to (more than 80) Ukrainian banks to find out whether and how much money is on the debtor account, the moral hazard is created for a dishonest debtor to have ample opportunities to set free by hiding or redirecting the assets. The Ukrainian law and practice needs to harmonise the ability to block bank accounts, regardless of the nature of debtor (corporate or private), and secondly, to enable electronic communication and automated blocking of company bank accounts with a simple software solution.

Let’s come back to where we started: the 30 billion EUR in unpaid court ordered debt. Who owes it? An extensive analysis of the structure of default indebtedness (unpaid debt) carried out by the EU Project Pravo-Justice shows what has probably never been a secret - that the bulk of that unpaid debt is owed by the Ukrainian authorities, State-owned companies, or big private corporate instruments with their (frequently) oligarchic domestic beneficiaries. In this context, by attempting to disallow the blocking of corporate bank accounts, the Ukrainian courts are willingly or unwillingly protecting these debtors, not the weak or underprivileged. And who is owed? Mostly Ukrainian private citizens, small and medium business, foreign investors. The Ukrainian State has for long behaved as a dishonest debtor who cheats its way out even after losing in court. In this context, the inability of enforcement officers to block bank accounts of any legal person - including, of course, any State body or company - smacks as engineered to cement the State’s dominant and discriminatory role in the country’s socio-economic hierarchy. So much for the interest of “caring about company employees"...

If one genuinely wants to safeguard the interests of the weak and underprivileged debtors in Ukraine to protect salaries, pensions or social payments, one must on the contrary rush to implement the ABABS solution. The aforementioned Lithuanian PLAIS uses software algorithms to: a) find whether or not a debtor has a bank account; b) distribute the enforcement amount proportionately between different bank accounts; c) prevent opening up of new accounts or flight of the money; d) safeguard some limited socially-protected amounts from the enforcement collection. If Ukraine really wants to promote more social fairness and equality in the context of the administration of justice, the first step should perhaps mean that the State should start paying its own debts.

And a message to those who will raise the perenial point of “there is no money in the budget”: ABABS will also help increase the Ukrainian budget because administrative fines will finally be collected, thereby also increasing the overall culture of responsibility in the society. A proper ABABS solution could eventually be also scaled to be used much beyond the enforcement system, automatically generating revenue the tax, customs, social protection and other authorities.

Read the story at Yurudychna Gazeta

Read the story at Leviy Bereg

Read the story at Censor.net

Read the story at the Ukrainian Pravo

Read the story at Ukraine World